The First RespondXR reseach team hosted a webinar that shared their research findings, as well as produced illustrations that offer a timeline and graphical overview of the deployment of Extended Reality (XR) technology for police training in England and Wales.

On May 26, SPRITE+ hosted a webinar alongside our funded project, First RespondXR: Digital vulnerability of immersive training for first responders. The aim of this workshop was for the team present their research findings to stakeholders, and share the resources they have produced throughout their project. The workshop featured a presentation of outputs from the project team, followed by a Q&A session.

Please read the blog written by the project team below to find out more about their work.

Written by the FirstRespondXR Team

The SPRITE+ funded-project “First RespondXR: Digital vulnerability of immersive training for first responders” examines the socio-technical-legal challenges posed by the adoption of Extended Reality (XR), including both virtual and augmented reality, in the training of law enforcement. XR is an umbrella term for all the 'realities', including Augmented Reality (AR), Virtual Reality (VR), and Mixed Reality (MR). Popular XR technologies include the Oculus Quest VR headsets from Meta (formerly Facebook), or applications of XR technologies including the popular game Pokémon Go, in which Pokemon characters are superimposed onto the user’s environment via their smartphone cameras.

The interdisciplinary research team, which came together as part of a SPRITE+ Virtual Sandpit, is lead by Dr Leonie Tanczer (UCL). It further includes Professor David McIlhatton (Coventry University), Professor Jill Marshall (Royal Holloway, University of London), Dr Mark McGill (University of Glasgow), and Dr Lena Podoletz (University of Edinburgh). Throughout the duration of the four-month-long pilot study, Marina Heilbrunn and Niamh Healy acted as Research Assistants for the project.

Since December 2021, the scholars conducted an in-depth analysis of the current state of knowledge when it comes to the use of XR for police training as well as its applications in other first responders domains (i.e., health, military, fire service). As part of this examination, the academics were able to map the vulnerability space of XR (i.e., its social, technical, legal, ethical risks and impacts) and provide an overview of the historical and regional deployment of XR by police forces in England and Wales.

Now that the project officially ended, the researchers are releasing a breadth of resources that will be of particular relevance to law enforcement officials, associated services working with policing stakeholders, as well as policy and industry actors' progress.

The first illustration involves a timeline of the XR adoption rate by police forces in England and Wales. It depicts when and how different police units begun to take advantage of XR applications in educational and other practical contexts. For instance, Gwent Police uses a 280 degree screen to create fully immersive training for police officers on how to deal with domestic abuse cases, whilst Greater Manchester Police (GMP) introduced a VR training pilot to help officers understand and empathise with hate crime victims. The second illustration contextualises the timeline by offering a visual graphic of the XR implementations by law enforcement in England and Wales. 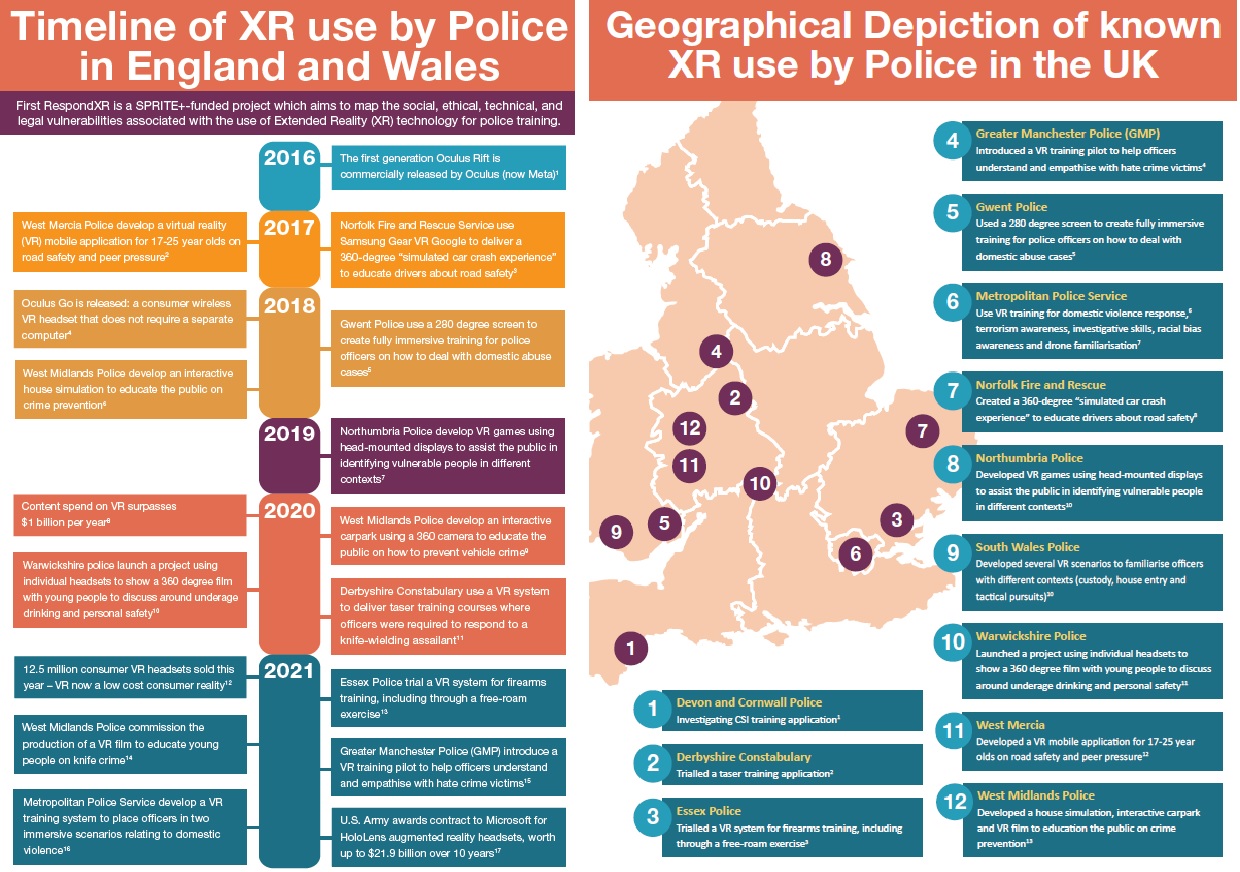 You can access the different versions of the map and timeline as well as additonal outputs by the team on the SPRITE+ project page.